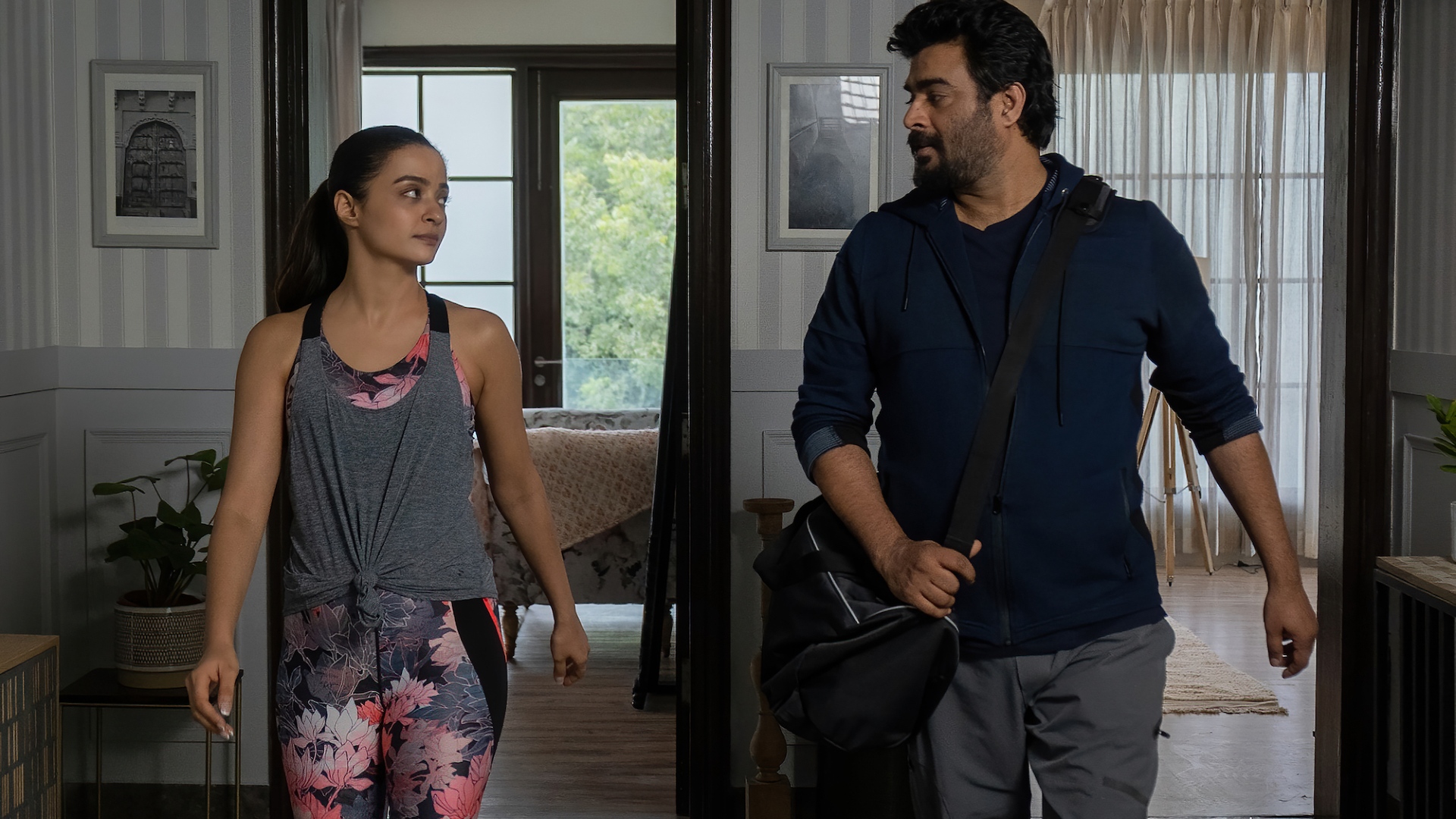 #decoupled
A web series that aims to normalise divorce discussion, friendly co-parenting even after separation and has R Madhavan playing the lead – should be a blast, isn’t it? Yes, I thought so too. In reality, though it sounds great as a one-line concept,  the execution doesn’t match the expectation.

It had all the right ingredients in place. The ever-charming Madhavan in the role of an author of mainstream pulp fiction Arya, his wife, Shruti played by a suave and elegant Surveen working in the capital venture business(or a start-up, it was never clear), smart sets, beautiful direction. But it is Manu Joseph’s writing that is at its irritating best. Okay, let me admit, I am not a big fan of his writing. But for the sake of a greater audience, I thought he would mellow down his insensitivity. And he did not.

The show tries to present a satirical commentary on modern, urban marriages through circumstantial anecdotes. But, in an attempt to create an “unlikeable-likeable” character the creator went overboard. The result was a self-absorbed smug, constantly trying to impose his supposed intellectual superiority over everyone and being a hypocrite all along.

Initially, in the first episode, the phobia to shake hands, and other such nuisances gave me hope. I expected him to be drawn along the likes of Sheldon Cooper, exhibiting idiosyncratic behaviour and a general lack of empathy but not cruel underneath. But, as the show proceeded it became obvious Arya was no Sheldon, but an obnoxious jerk. The offensive list that starts with belittling security at the airport for doing his duty kept on searing exponentially. Fat shaming, mansplaining, belittling subordinates, objectifying women, ragging the waiters and drivers for their job – you name it and have it. A misanthrope, self-centred privileged man who judges women by their “butt-size” and tries to vent his frustration by ruining beautiful moments of unrelated people should hardly raise an iota of sympathy from any sensible audience member. Neither the character shows any sign of genius. For unaccountable times in the show, Arya has been referred to as the “second best selling author” of the country. And it was necessary because otherwise, he showed no characteristic of a writer.

The show was problematic on so many levels that I can’t even put my finger on a single one. Using the naivety of a driver for your entertainment, discussing his body odour at earshot, or offering a gold chain in exchange for sex to sound romantic – the cup is overflowing. The show even mansplained ovulation cycle by three men!! The poor characterization failed even the charm of R Madhavan, who could make the role of a stalker and an imposter look romantic (RHTDM).

I watched it and kept on asking why Maddy why. On one hand when the country is already going through bouts of Islamophobia at every street corner, and where people are being stopped from offering Namaaz, did you really have to fan the hatred with the poor joke of a scene, mocking the prayer. It just left a bad taste.

Yes, I won’t disagree that the show had its funny moments but the cringe comes too often. As they said in the show, “the jokes did not land.” After endless manifestations of classist and casteist abuse of waiters, waitresses, drivers, bartenders and domestic workers it was a mockery to prove a point about the sanctimony of the elite. The show does add a scene in the end where Arya defends his wife to his daughter by saying that he is ‘difficult to stand by‘ and yet, she has done that for him. But the scene came too late and was too little for the damage already done.

It is no wonder that the writer who tries to pass off masculine self-obsession and its projection of a stubborn, incorrigible, arrogance as intelligent humour is defending himself by saying, “The right kind of simpletons who use the word problematic is finding it problematic.”

This is a classic case of demonising women as the problem-makers for pointing out misogyny and patronising them as ‘simpletons’. Well of course with a series of endless offensive things can only be countered with more “offence”. But someone should tell him this is not an original trope of male fragility as Manu Joseph’s inflated ego likes to tell himself.

The only saving grace of the show was Chetan Bhagat. Yes, I can’t believe myself writing it. But the banter between the two authors came as the most genuine of the lot.

Another silver lining to this otherwise disaster was the hope it showered on the aspiring writers. Though looking like a fairy tale the show insists that writers can be rich too!!

The show had left me fuming so this write up is more of a vent out than a review. But for the greater good, I have decided to post it to save the sane from going through this torture. Despite everything, I still know there will be people who might still enjoy it because as we know there are many too many of such Arya s roaming around some proudly wearing the privileged male ego as a badge and some more gloating it secretly.

Kolkata is beckoning you. Read the A to Z chronicles of the mesmerising city of joy on my new book Tilottama at Glance. The book is now available on Amazon, Google Play and the website of Ukiyoto.