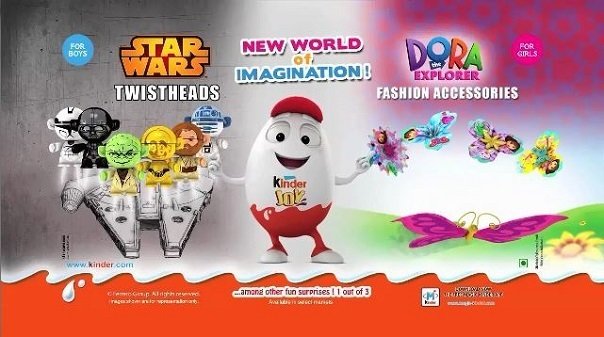 Last week a junior colleague in my office gave me a kinder joy. If you are wondering what is that, it is candy by the Ferrero company which has plastic egg-shaped packaging that splits into two; one half contains layers of cocoa and milk cream, and the other half contains a toy and a spoon on its wrapper. 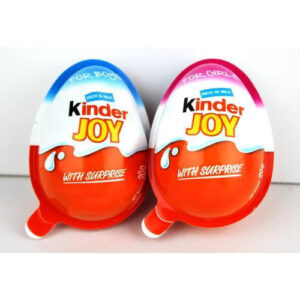 Now, the delectable sweetmeats were not for my consumption. It was a gift for Sampurno, my almost 18 months old, which he loved. And he loved it so much that the next day when I returned from the office, he promptly asked for one more. Chotate(chocolate) he calls it. I did not have one and a tantrum followed. Anyways his love for the chocolate was now evident. So two days later we decided to get him another Kinder Joy and I was in for a rude shock. The shopkeeper asked me nonchalantly if it is for a boy or a girl! And the feminist in me was aghast. Since when are we dividing chocolates based on gender?

Looking at my surprise he explained that the blue ones are for boys and the pink ones for girls. So innovative! 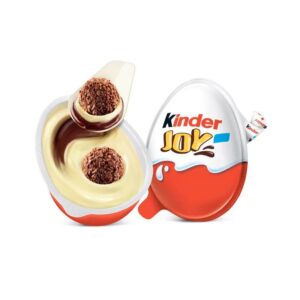 Apparently, the chocolate is the same, the cream is the same, the cost is also the same but it is the other half containing toys that make the difference. There are two colour variants: the blue package “for boys” comes with pieces that assemble into automobiles and superheroes, while the pink one “for girls” comes with so-called “feminine” toys such as accessories for Barbies and Disney princesses. And I gathered this is not a new phenomenon but marketed and accepted by the market for quite some time. I have been living under the rocks.

I am a mother of a toddler who is trying to instil the values of equality from the early days. We are trying to introduce him to all kinds of toys and books. Currently, he loves to play with the mirror or cooking utensils more than cars. He might love the pink ones more than the blue ones despite being a boy. Why should Kinder Joy decide what my boy will play with? Aren’t we imposing an unjust bias in these young minds about gender stereotyping? And blue is for boys and pink is for girls is such a backdated concept. We must ask the makers the reason behind their thought process that prohibits them to think a girl child would like brushes and mirrors more than cars. For a product whose target customer ranges in the age of 2 to 8 years old, which can be well treated to be genderless such marketing ploys is not only irritating but irresponsible too.

While there has been an effort going on to move towards a more balanced world, children today should grow up in a society that lets them be whoever they want. A girl should know she can play with cars, lego, or other so-called ‘boyish’ toys, and a boy should be able to dress up a barbie without being ridiculed.

Toys play an indispensable role in shaping the personality of a child. It is irksome to see shrewd marketers manifesting deep-rooted gender stereotypes to make profits.

Gender stereotype is defined as a generalized view or preconception about attributes, or characteristics that are or ought to be possessed by women and men or the roles that are or should be performed by men and women.
It has been observed more than biology, family, friends and society influence impressions of what it means to be a boy or a girl, placing rigid gender expectations on children from a young age. 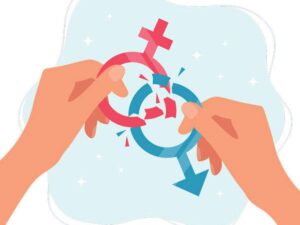 We all have absorbed these role specifications within our internal system at such deep levels that we forget to introspect and think logically about such attitudes and behaviours. And somehow we become a part of it by either experiencing it or by actually doing it or by just quietly watching it happening around. One example is this Kinder Joy case which the parents have accepted as the norm.

In long run, it tries to reinforce the hegemonic myth: a perception that men are the dominant sex, strong and independent, while women need to be protected.

This idea is often fed in early childhood and are reinforced by schools, parents and media and creates a lifelong impression on young minds.

In any part, if the world lessons about gender start early, and they have lifelong consequences. Stereotyping gender roles often lead to Gender discrimination.

Gender Discrimination exists in some or the other form in every stratum of society. It is fueled by sexism, which is prejudice based on sex or gender. Such discrimination is characterized by actions that are deliberately unfair and unintentionally unfair. Illustrating some instances and situations below.

• The primary example is schools, where more girls and young women are discouraged or prevented from participating in traditionally male-dominated fields, such as science, math, and sports. Another classic example is forgoing miscreants with the comments, “Boys will be boys.”

• In the workplace such discriminations creates greater harm. Deciding not to hire or promote someone, treating employees differently, or paying them less based on their gender are all examples of workplace discrimination.

• Gender stereotyping that leads to gender bias often affects relationships adversely. In many families, such bias leads to preventing women from joining the workforce, marital abuse or not allowing the females to handle financial matters.

• In public places such discriminating minds lead to unwanted sexual harassment and catcalling. This often limits the freedom of movement of the affected gender and in general creates an unsafe environment.

• If one thinks only women are affected by gender stereotyping then that will be a half-truth. Men are also a victim of patriarchy – a sublet of gender discrimination. Boys are told to suppress emotion from childhood. “Boys do not cry,” “Why are you crying like a girl” – such comments have denoted crying with a sign of weakness. When in reality crying is a way of relieving the body’s pent up energy. This in the long turn affects their mental health and increases the emotional burden. Teasing or putting down males for engaging in activities or behaviours that are stereotypically “female”, such as playing with dolls, interest in cooking, gossiping etc. bring down their morale.

Conclusion
Coming back to the problem statement. Children are our future and should not be unfairly targeted for business agenda. The evil that is gender discrimination should be dealt heads on and the seed of such change can only germinate if sown early in life. Popular companies should introduce marketing strategies more responsibly especially those dealing with the interests of kids as it is the responsibility of society as a whole to teach our future generation what is right.

Previous articleAIRAVATA MICROBLOG HOP BY WIZARDENCIL
Next articleBook Review: Two and A Half Rainbows by Siddhartha Krishnan