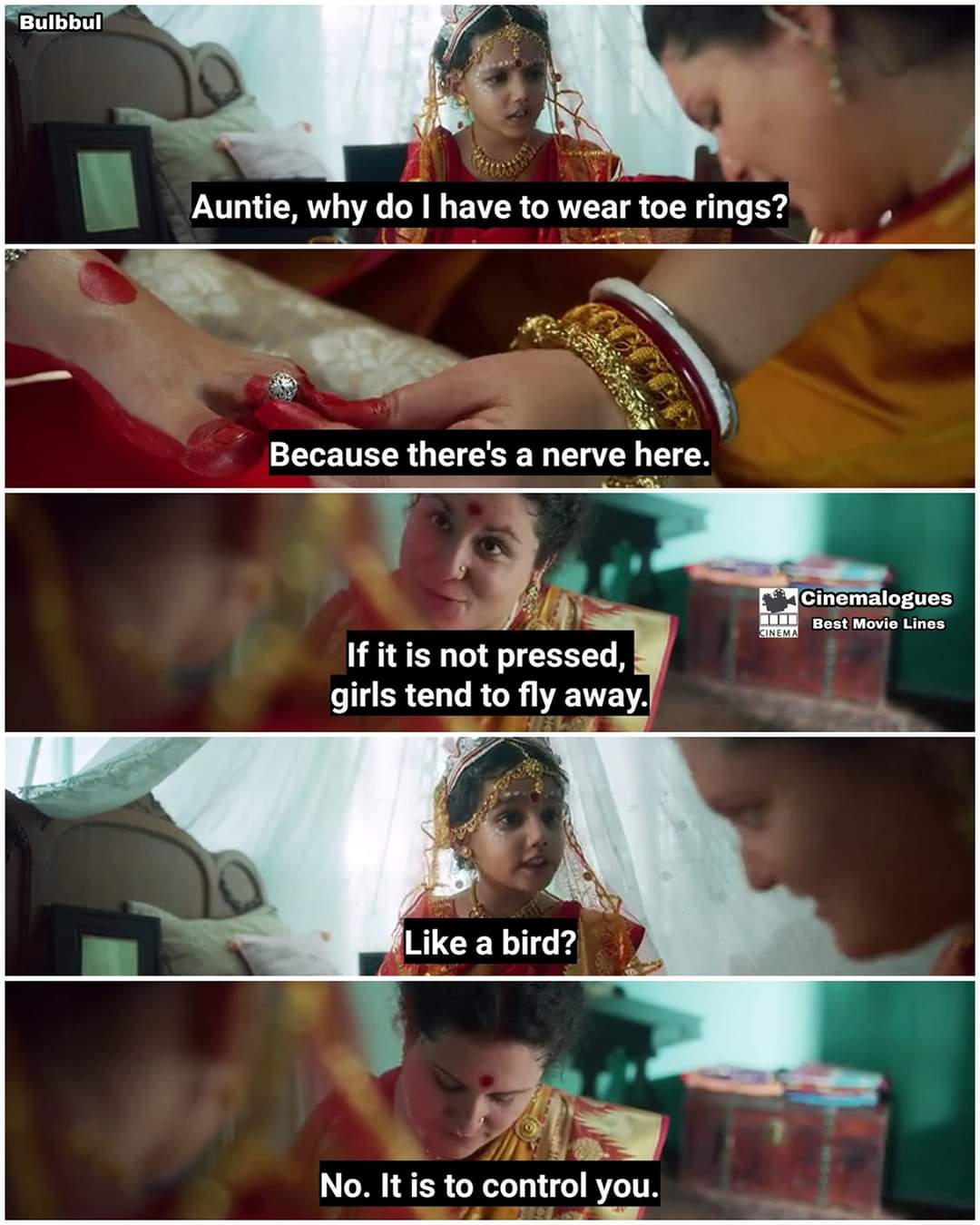 The attached  picture almost sums up the latest presentation on Netflix, Bulbbul. For centuries the women has been controlled by the patriarchal society. Some in the name of rituals, some as societal norms, some as their property.

For men, the women had been their prized possession, ‘a doll’ or a friend who is righteous in all respect. Men can uphold the women in their life as a Goddess if she is coy, stays within her boundary (decided by society) and takes care of her abusers without a complain And if they rebel they are the ‘witch’. But to respect a woman as a fellow human was difficult in the era of late nineteenth century when this period Gothic drama was set in. Sadly though, the story spans around 1881, almost hundred and fifty years later things haven’t changed much.

The story is simple and shows how a naive, chirpy woman married to a man triple her age being wronged by the men in her life. Abused by someone who treats her as ego booster or someone who treats her as ‘doll’ or a friend who decides what her boundaries should be. Ironically fuelled by another Woman who unknown to self, is herself a pray of patriarchy . The story is also about woman standing for her tribe, and empathy towards fellow womanhood. Without revealing anything more of this Gothic tale set in rural bengal of 1881, let me jot down some pros and cons of the show.

Pros:
1. First and foremost the cinematography. The presentation takes the not so extraordinary story to a different level. One remains glued to the screen.
2. Powerful performances. Tripti Damri as Bulbbul steals the show in my opinion. Her beauty, expression and smile – be ready to have crush on this newbie. Equally brilliant performance by the veteran Rahul Bose, Paoli Dam and Parambrata. However the character of Satya and his performance was a tad bit disappointing for me
3. The beautiful haunting background score, gave the proper support to the show
4. Costume and set. I have been to Bawali Rajbari where this was shot and believe me that beautiful palace has been used very intelligently and aesthetically in the movie. And the costumes and make up. The transformation of the child bride, inexperienced, naive to a super confident Thakurain is as much a credit to the actress’s expression as to her style and makeup. The saris were drool worthy.
5. The message and symbolism. Subtle hints and dialogues kept the show on. One dialogue especially when the husband asks ” what can be personal to a wife other than her duty towards the husband” just summarises how toxic masculinity is not always about violent streaks, they flow like under current through their life. There are many such symbolism but I do not want to explicitly mention them here
6. A welcome change of background from North india to bengal rural.( I may be a little partial)

However does that mean the movie is perfect? No it has its flaws
Cons:
1. The duration could have been stretched. It could easily be a 4 or 5 series drama. Some characters remained half baked eg. We could see Bulbbul unapologetically in love with Satya, but Sara’s feeling weren’t showed except for the fleeting seconds in climax
2. Predictable story. Could have been more gripping
3 *spoliers ahead* It doesn’t need one to be intellectually challenged to rape. Also why a twin? It could have been anyone. Or may be there was some underlying motive which I couldn’t decipher.

Overall a good watch which haunted me for some days and actually forced me to write a review after long time. And those who are complaining about missing some horror point, i just want to put, some lives are more horrifying than ghosts. Those horrors of the society shouldn’t be kept like ‘bade haveli k bade raaz, Chup rehan

Thanks to #cleanslate production and #AnushkaSharma for bringing such offbeat things online. 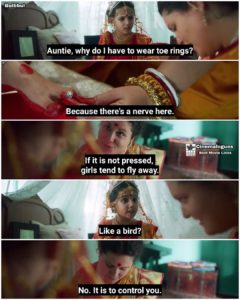