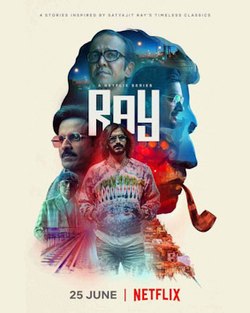 Ray. Satyajit Ray has always been an enigma for me. Long before the movie maker Ray made his way into my heart, it was his stories that hooked me up. I grew up reading Feluda, Tarini Khuro, Prof Shanku and his other short stories. All those short stories had a common trait. They were precise, unpretentious and had a twist at the end. The best thing about these stories, which revolved essentially around the peculiarities of human behaviours, were the dialogues and the absence of unnecessary explanation. So when I heard that the stories were being adapted into a miniseries, the avid Ray fan in me was a little skeptical. I knew in the name of creative liberty the legend’s legacy will go under the knife and scissors, and I might not like the result. Still, I dared to watch with a consolation that even Ray changed stories like Goopy Gayen Bagha Bayen when he took them up for screen adaptations.

The excellent opening credits, following Ray’s own style, draws us into the fantastical world. And we land into the first story of the four part mini series, “Forget Me Not“, inspired by Ray’s short story Bipin Chowdhury’r Smritibhrom. I read this story long back, most probably in an old edition of Sandesh. Revenge designed as pranks – was the main trope in the original story. The director added much grandeur to the setting, added new characters, swapped the gender of the few and keeping the basic premise the same, turned a humorous story into a half-baked revenge tale with a dark tone. Bipin Chowdhury was not a likeable character, but, Ipsit Nair was portrayed as an out and out ruthless, selfish person. And that changed the tone heavily.

The welcome change in the story was the introduction of women characters who never found any space in puritan Ray’s tales. The adaptation had its moments of spark. The surreal dream sequence, reminding you of the famous one from ‘Nayak’ or the one transporting through the memory rooms. If I do not compare it to the original story, this was not an altogether bad one.

The second story, Behrupiya, adapted from the story “Bahuroopi” was another story, almost of the same trope. The original story revolved around a similar premise of using pranks as a form of revenge. Nikunja Saha, with his newfound fortune and a training book on makeup from a distant uncle, starts experimenting with prosthetics and make-up, and find great pleasure to see friends and acquaintances being unable to recognize him. With a humorous undertone, the story was about how ego can curse your fate. Srijit Mukherji’s adaptation does not believe in such simple storytelling. So he had to bring violence and sex to sell the otherwise perfect tale. While Kay Kay Menon was perfect in his acting, it was the changes to the story that irked me. For God’s sake, you don’t need to sexualize Ray’s story to sell. A part of my childhood was scarred. This was definitely disappointing for me.

The train of stories was derailed for me after the second encounter until Manoj Bajpayee boards the train with Abhishek Chaubey’s directorial venture, Hungama Hai Kyon Barpa, in the third instalment, a classy adaptation of Barin Bhowmick er Byaram. To give him company we have the effervescent Gajraj Rao and together they take the viewers through a joyride of a delightfully written story about kleptomania or in their words, Ki-le-pa-to-ma-nia. The genteel film captures the wit of Ray’s words and the finesse of the two actors, with a topping of brilliant cinematography that keeps us hooked. For a story where much of the incidents happen inside a protagonist’s head, the director most skillfully have used the props(like clock background, train mirror, an imaginary audience) and settings along with well-written dialogue to capture the attention of viewers. This one was the closest adaptation of its original version, a welcome change from the previous debacles. The ending was changed a little, but it did not mar the story. Rather, in my opinion, the scene of pointing to a stack of purloined Ray manuscripts acknowledging how all artists can be victim of stealing, was a brilliant touch. Overall Abhishek Chaubey’s understanding of Ray’s world seems closest to the original works and this one is a must-watch.

And lastly comes Spotlight, adapted from a short story by Ray, with the same name and this one is miles away from Ray’s original story. The original story was a humorous take about a family vacation, marked by the arrival of a film star, who is in turn upended by a positively ancient man. Keeping only the main idea of ousting one’s popularity against another, the screen adaptation is nowhere similar to the original version. Vasan Bala plays with the idea of ‘temporal’ as he plants a godwoman pitted against a successful superstar on a location shoot. The clash between the ego of a superstar with Didi, a mysterious religious leader with a cult following, was shown in the most amateurish way. The idea was noble. Busting the superficiality and fakeness of both the filmy and the spiritual world of godmen. The execution not so much. While the original story focused on the story of the ‘new star’ this one revolved around the ‘superstar’ Vikram aka Vik and his antics. However, the brief appearance of Didi, played skillfully by Radhika Madan was the only notable scene of the movie. Ultimately, though, the woman ends up being used as a plot device to further the man’s journey and return his ‘look’ or whatever it meant. The noteworthy thing in this not-so-memorable venture, the trippy sequence which is heavily inspired by Bhooter Raja. If I have to rate, this was the weakest of the lot.

Overall, this is a one-time watch and if you are running short of time just skip and watch “Hungama Hai Kyon Barpa”. Avid Ray fans better stay away from the other parts.

You can find it on Netflix.