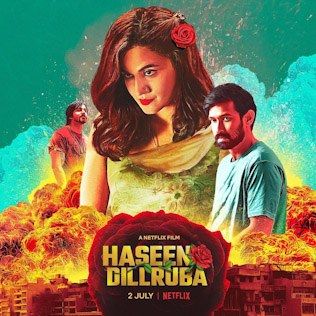 So you have got the perfect recipe and ingredients of biriyani and also the Chinese fried rice. What should you do? I don’t know about you, but if it is Vinil Mathew then probably he would just mix all of them and cook a ‘khichdi’.

Yes, I am talking about the latest venture of Tapasree Pannu and Vikrant Massey, “Haseen Dilruba”, a not so perfect cocktail of thriller and fantasy.

Yes, what I read on internet and having heard from acquaintances, many loved this movie. But, my point of view differs. A warning in advance to all those who had liked the movie, this is a rant post.

I got a holiday from my bank duty after what felt like a eon, today. Had the perfect lazy afternoon to spend with my hobbies (2 books are loitering in my Kindle library, 1 on my table, screaming for attention) or get some salon services, but, I chose this!

Thriller and fantasy are two completely different genres. And it is unwise to blend the two. But, the story writer and the director thought, we have such talented actors on board so let’s screw the plot. The performance would make up for the plot holes. Many would argue that it was no fantasy. But, I prefer thrillers closer to reality.

The story started well. A gas cylinder burst, the wife was conveniently outside the house, feeding the street dogs while the husband got blown away. His body is unrecognisable except for a cut hand, where he had tattooed his wife’s name.

The story is told in a flashback as the wife, Rani, the main accused narrates her life and the incidents.

But, do we really tell the police such details of wedding and first nights? Don’t know.
So the character of Rani, a feisty woman who is a fan of a fictional Hindi crime novelist, Dinesh Pandit, marries Rishu, who is an engineer and so he fixes all the electrical appliances(so typical). The story moves forward and to add to the zeal between the too-good husband and sexy wife, enters the hot guy.

What happens next, you will know if you watch, which I won’t suggest.

Vikrant Massey as usual is superb in his role and I think he can ace any role available.

Tapasee was in my opinion, just being Tapasee. Suave, confident, beautiful. But at places reminds you of Badla.

But the story! Especially the ending was a complete turn off for me. Forced and absurd. And to know the writer is Kanika Dhillon, the disappointment was double.

At one point I also wanted to shout like that police officer – “Pehle toh us Dinesh Pandit ko pakad k lao.”

This fictional author was referred one too many times and after a point got into the nerve for his absurd quotes.(personal opinion).

The songs are nothing special.

And to glorify ‘attempt to murder’ as romance is the new level of low. What were you thinking Tapasee when you signed?

The film ended with a definite ending but I was left with many doubts.
Can one swim with a single arm? ( I am a non- swimmer, so clueless).
What happens to the job?
What was the parent’s reaction?
Etc. Etc.
Overall it left me reeling with a sense of time wastage and emotional over absurdity.