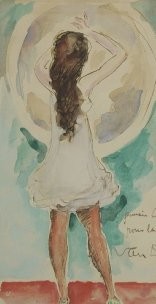 Time and Tide wait for none.

Looking at herself in the mirror Mira heaved a sigh of grief. Yesteryear’s leading heroine, the dream-girl of millions, also could not escape the law of nature. Age has started showing its sign on her face. Her earlier appeal was fast leaving. She is gradually being replaced by younger actresses in the industry. Millions spent on cosmetic surgeries also could not reverse the stamps of time entirely.

Suddenly someone whispered, “Do you want people to love this face again?”

Startled, she looked behind. No one was there.

Again the whisper came, “You can still have it all back. The beauty, younger days. Don’t you want that, dear?”

The voice was coming from the mirror.

A silhouette gradually appeared on the mirror. The face was unrecognizable, but the voice was hypnotic. In a dreamy voice it continued,

“Just hold my hand, darling. I can lock your youth forever. Trust me.”

A hand stretched from the mirror. In a trance Mira slowly moved towards the mirror and took the hand into hers.

Moments later she found herself trapped inside the mirror, but in a younger body.

The silhouette has now transformed herself into older Mira, standing outside the mirror, laughing at her folly.

“Deals to reverse flow of time can be dangerous, darling,” she warned sarcastically before leaving Mira trapped forever.