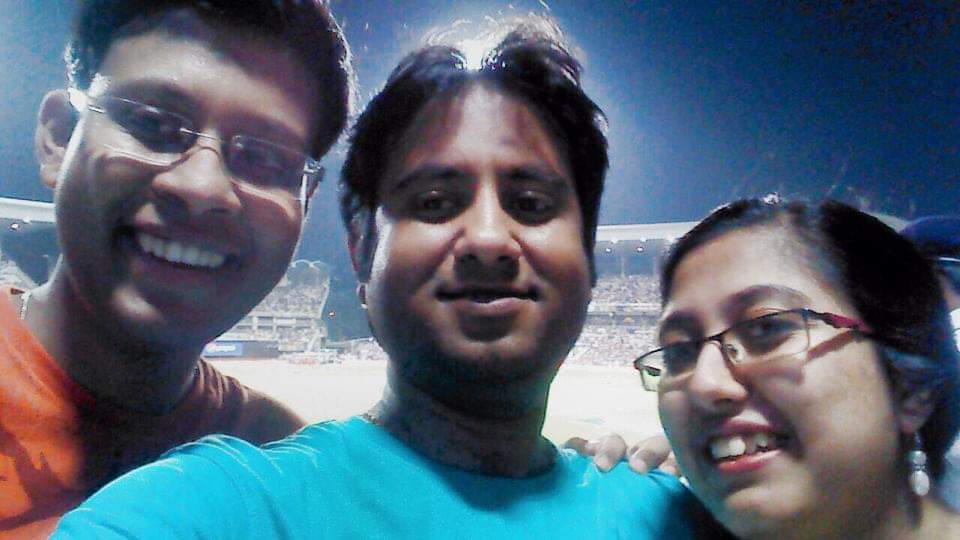 The day I decided to write about blogs on Kolkata, the letter E was reserved for the fish Elish (Hilsha fish). But at 9 p.m. on the coveted date 5th April as the people started celebrating the call of unity instead of lighting a diya or torch in their home, by bursting of crackers and marching with mashals*, it reminded me of the winning of cricket matches. Though I would diplomatically avoid any further sentence on the above action, it did give me another idea. How could I not mention Eden gardens in my Kolkata chronicles series? Missing it out would have been a blasphemy.

What Kolkata has for sport is an unadulterated passion. Naturally the place that has witnessed the victorious cheers and losing sighs of many a cricket enthusiast – the Eden Gardens, is more than just a stadium. It is not just another cricket ground in India, established in 1864, the oldest in the country, is a historic and one of the most iconic stadiums of the world. Often hailed as the “Mecca” of Indian cricket, has witnessed many a historic events. Eden Gardens hosted the 1987 Cricket World Cup Final which was first ever Cricket World Cup final hosted outside England. The crowd here is emotionally attached to the match. The worst example of that could be the 1996 World Cup semi-final which was called off and Sri Lanka awarded the match after crowd disturbances followed an Indian batting collapse. The stadium hosted the 200th and 250th home tests for India in 2005 and 2016 respectively.

My first visit to the Eden gardens was however much later in life. It was only after marriage, I started accompanying my husband a complete cricket buff to various matches. The first match being a KKR-RCB IPL match which KKR lost miserably. My husband, however, has many fond memories of the stadium. And he is originally from a district around 250 KM away from Kolkata.

In his words, “Baba was visiting Kolkata for his business. My finals had just finished. So I accompanied him. It was the year 2001, India was playing a test match against Australia. The day we arrived in Kolkata, the second day of the test was going on. It was an era before we had any mobile phone. I was following the match on a radio. The Australian team, rated during that time as the best in the world, had won 16 Tests in a row, a Test cricket record, including the previous Test at Wankhede Stadium in Mumbai by 10 wickets. The first day though was somewhat in our favor due to the impeccable hat trick by Harbhajan Singh, the second day was proving to be fatal. Baba’s errand was wrapped up by 2 and then I insisted to visit Eden once. So at 2:30 pm, with no ticket, we were at the gate of Eden Gardens, begging and nagging two policemen to let us in. The days were simpler, the security were less and it was before those seats arrived in the stadium. They perhaps took mercy at my hopeful face and let us in. Only the last session was left. That was the first time I stepped into that gigantic stadium. It was years ago but, still, I can recall the feeling. The first player I saw on entering was my hero, McGrath. A few feet away from me. I could faint with happiness. The crowd was eclectic and the ambience, mesmerizing. The day wasn’t good for India as the team ended the day with a 128/8, still needing 118 more to avoid the follow-on. I returned to Murshidabad the same day, and followed the rest of the match from home.

What happened next is written in cricket history with golden words. The follow on, the great partnership of VVS lakshman and Rahul Dravid, the double century of Lakshman, bowling of Harbhajan, and a team winning the match after following on. Too many things happened there and all cricket lovers remember that day.”

My husband visited the stadium many a time after that, but, that first visit was special. He repeats this story sometime. Secretly he believes his visit to the ground had some magical effect on the match. After all what is life without a little magic. And when we are talking about the city of Joy, can magic be really tar behind?

Note: This blog is a part of #BloTchatterA2Z challenge.

Glossary: Mashal – A torch is a long stick with burning material at one end,