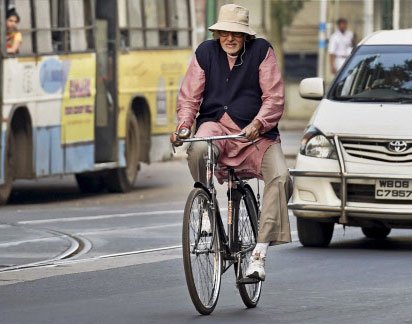 On a hot, sultry afternoon, a barely 20-year-old delivery boy pedalled his way inside the society on his bicycle. He had brought me the much-awaited books that I ordered a week ago. As I offered him a glass of water we had a quick chat.
“This cycle is keeping us alive, madam.” He said quite dramatically. Apparently, due to lockdown, his father lost his job. So he had taken up the baton to run the family by delivering on his cycle.
“If only cycles were allowed on more road I would have got a wider area to deliver. It would have fetched us more money.”
A similar story I heard from a maid in the building who usually comes by cycle.
“Earlier I took the bus. But these days the buses are off the road. And this cycle is more hassle-free. But I have to take a longer route through the gullies to avoid the main road.”
Traditionally, slow-moving vehicles like hand-pulled rickshaw and cycles are banned on major roads.
The above two are just a few of the many who are echoing a similar thought and voicing the need for fewer restrictions on cycles. In the absence of enough public transports or to avoid the crowd during the pandemic, many city dwellers are switching back to the age-old cycles for the ease of commute to the office.
However, the traffic law is making things a little difficult. Cycling is completely restricted or limited between 11 pm and 7 am on 62 roads and flyovers in the city. The reason cited being road safety.
Undoubtedly it is the most eco-friendly mode of transportation and a viable solution to free up our choked roads. It is also a great cost-effective alternative to tackle the surging fuel costs and a good way to replace a sedentary lifestyle with a more healthier way. But, despite all the positive aspects, it is often termed as a dangerous vehicle that may put the rider’s life at risk. The problem is not the cycles, but, rather our system. The current policies in the city are hostile towards cycles and similar non-motorised transports.
To solve the issues and optimise the use of this mode, first and foremost States must ensure that non-motorised transport, road users are prioritised in street design rather than motorised road users.
There should be more cycle tracks and it should be ensured that the lane is only for the cyclists and not to be used by the other mode of transports, or hawkers! Also, these cycle tracks should be properly lit.
The arbitrary ban is only hampering a more lucid and hazard free movement affecting domestic workers, milkmen, newspaper delivery men, factory workers, and others who cannot use cycles as the only means of transportation.
SwitchON Foundation has taken up the onus to bring back more cycles on the road and has launched a petition on the occasion of the World Bicycle Day, requesting the Transport Minister, Police, Department of Transport and other associated authorities to make our city Kolkata cyclable. The immediate demand being –
• Immediately lift the ban of cycles from major roads and allow them safe passage
• Ensure safe cycling campaigns, clear traffic signages etc.
• Identify safe cycling corridors and create a cycle and NMT lanes in the cities
• And lastly, move away from car-centric transportation planning and incentivize cycling by making them feel a part of the system.
If you are on the same page please amplify the cause by signing this petition –
https://www.change.org/bringcyclesbackonkolkataroads

Note: This post is part of CauseAChatter by Blogchatter