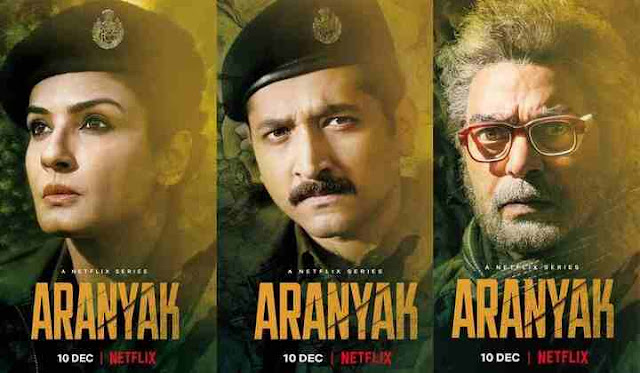 #Aranyak
These days I am usually never up to date with the recent web series. The recommendations come, the weekends arrive but I miss them on time. The hiccups are many – office work, writing commitments but more importantly because the youngest member of the family has learnt to pull out the plug whenever his mom tries to watch anything on the TV screen. Still, we managed to binge Aranyak on the date of release. The primary reason is the title. This name evokes a unique emotion because of its namesake book by Bibhutibhusan Bandhopadhyay. Those who know it just know it. The secondary reason is Parambrata. Well that this series is nowhere even close to the brilliance of Aranyak I was referring earlier but has its moments of glory. The series is a beautiful blend of inter-connected themes depicting marital troubles, political machinations and investigative prowess all without missing a beat.

Aranyak starts with a bang. A small town Sironha in North India with its cold and dark landscape, a cop who is not a supermom and another cop who had a traumatic past and coming to take charge from her. The two needs to work together when a certain mythical creature who is half human half leopard strikes back after 19 years. The episode introduces a plethora of characters foreshadowing the fact that something has happened, some grave crime. The suspense builds on.

The series has many a thing working for it.

Firstly the stellar cast. Raveena Tandon as SHO Kasturi works hard to make her role believable. She carries an effortless screen presence but it is the tonality of her character that falters. But it’s (I might be a little partial) Parambrata Chattopadhyay’s Angad who steals the show. He plays his part with dedication and the unique chemistry between the two leads is really interesting. All the other characters also stay true to their part and help to build a believable thriller.

Another is the building of suspense. Till the 6th episode, too many things are happening and it is hard to collate all the points. The pace is fast and there is not much scope to get distracted. There is enough mystery, red herrings and suspense to keep the viewers hooked. It is not every day this sleepy head is forced to stay awake till 3 in the morning.

The feminist in me was happy when the lead protagonist was not shown as the master of all. Yes, let us admit that being a woman doesn’t automatically upgrade someone to a great cook. She can falter too. I liked the true portrayal of the challenges faced by a working woman. Especially the ego tussle between the couple, the insecurity of the husband was endearing.

The camaraderie between the father in law and the daughter in law was another highlight of the show where Ashutosh Rana was quite a treat to watch.

Now coming to what did not work for me
First and foremost, the ending. Without giving any spoilers I have to admit it was too much of an anti-climax. The superb built up fell flat in my opinion on the last episode. The twist felt forced and the climax looked straight out of 90s Bollywood where the hero flies in at the last moment to save the day.

Secondly the uneven tonality and portrayal of characters. Ashutosh Rana plays the archetypal ‘retired cop’ still haunted by the killer that got away. His role started the role as someone who forgets things, even mistakes his son as someone else. But down the line, the writer forgot that trait.

Then there was the lead actor, who believes in the primal methods of investigation( that is slapping every accused or complainant around). Not a shed of empathy she is seen to be having for a mother whose teenager was raped and murdered. Kasturi is as brutal as possible. In some next scene, she is justifying her rejoining the force as to provide justice for that young victim. Her naivety in the initial episodes also irks. Like a senior officer not knowing about jugular veins. This lessens her credibility as a character when she starts showing her adeptness in the investigation.

Overall it was a fine watch and the second season will be awaited. Hoping the plot holes to be addressed then.

Tilottama At A Glance.  The latest book of Wizardencil aims to take her readers on a journey through the hearts and minds of the Kolkatans, riding the highs and lows of the emotional roller coaster, that the community life in Kolkata encourages and fosters.

Kolkata awaits to walk into your reading shelf.