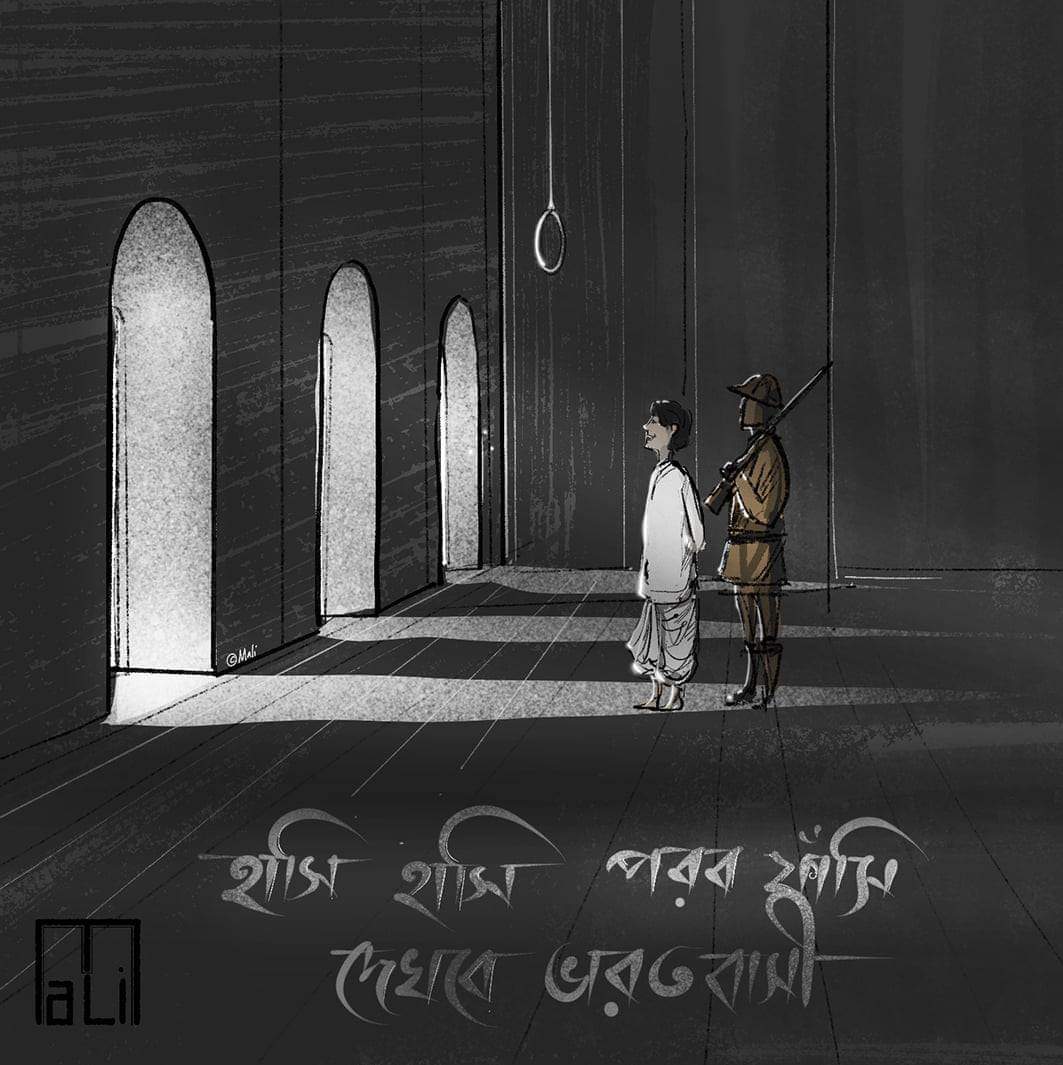 I was hanging on the wall of the courtroom, precisely in the same position, since the first day of the year. The clerks had been kind enough to put me up at a favourable spot, where I can conveniently witness the entire court proceedings, without any hindrance. And the court cases, I must say, leaves you much entertained, even if you are stuck up the wall. And one more thing, l may not change my position, but, my identity changes every day. For instance, that day, I was the 8th of July, 1908. Yes, you guessed it right, just a wall calendar. But, on that particular date, this petty calendar witnessed a special case.

The day was sultry and the heat, even within the four walls, oppressive. There was too much commotion around the room. Must be an important case, I guessed.

As my friend, the gigantic clock behind the judge’s table approached 10, the Muzaffarpur courtroom started filling up. The prosecution and the defence lawyers started taking their respective seats. I was astonished to see five advocates defending the appellant. Must be some influential royal, I thought to myself. Even local people started flocking for the hearing. A pretty powerful person, I assumed. But, the criminal, who was escorted by the local policemen inside the court, took me by surprise. A mere lanky boy of 18 or 19 years old, not very well kept, but, looking quite determined, walked inside, with a cheerful smile. He seemed to be away from any worldly anxiety. A native appellant not deterred by the fierce British law, my curiosity level knew no bounds.

Soon the session Judge walked in and after the usual greetings, the hearing of the announced case, Bose Vs Emperor, started.

The prosecution, one British advocate, started briefing the case. With each word I gasped and looked at the young boy. The innocent face did not match the harsh accusations thrown at him.
In a baritone voice, the prosecutor started his opening speech, pointing at the accused, Bose, fiercely,

“This young boy of Bengal is nothing but, a terrorist. He has murdered two innocent Englishwoman by hurling a bomb at their carriage. On the 30th April 1908 at, 8-30 P.M., Mrs. and Miss Kennedy left the Station Club in Muzaffarpur to drive home in a single-horsed carriage. Their carriage was similar in appearance to that which the District Judge, Mr Kingsford, was then using. As the carriage reached the eastern gate of Mr Kingsford’s compound, this young fellow along with his other accomplice threw bombs at the carriage. The body of the carriage was then found to have been shattered and the two ladies sustained terrible injuries. Miss Kennedy died of her injuries within an hour. Mrs Kennedy survived till the morning of the 2nd May when she also succumbed to the injuries caused by the explosive bomb. The defendant was arrested from Vaini Railway station when he was trying to leave the city.”

The prosecutor stopped to take a breath and I stared at the astonishing boy and wondered what may have instigated him to do so.

“At the time of the accused’s arrest, a heavy unloaded revolver and a smaller loaded revolver was discovered in his pocket. He drew out the smaller ones with the apparent intention of using them, but the force stopped him. He is a dangerous being to be left free at any cost,” the prosecutor continued.

“The abandoned shoe that was found at the murder spot fitted him perfectly. The local witnesses have already identified him as one of the culprits who were seen running from the crime spot. And above all, the accused’s confession had been recorded by the District Magistrate where the appellant made no denial of his guilt. Whether he intended to cause the death of the two ladies or someone else does not affect his or their guilt. I think there should not be any further doubt regarding his miscreants and the highest grade of punishment should be conferred on this terrorist to set an example.”

The courtroom broke into an instant discussion as the prosecutor stopped his speech and only after multiple warnings from the judge, they calmed down a bit. Amongst the whispering and cross-talks, the chief defence lawyer presented his argument.

His main objections were, this young boy knew nothing of bomb-making or using one. He was too young to know such things. He was just at the wrong place with the actual culprit, who had already committed suicide. Also, the confession of the accused recorded by the District Magistrate, recorded under the provisions of Section 164, Criminal Procedure Code, was inadmissible in court.

Soon the accused was brought to the box for cross-questioning.

“So Mr Bose, you are from Medinipore, Bengal?”
“Yes”, he replied calmly.
“ So, what made you come to Muzaffarpur?” the attorney asked.
“We wanted to kill the District judge, Mr Kingsford. He is a harsh and unjust judge. He had always given an unfair trial to the young political workers and inflicted corporal punishments. We wanted to avenge him. And we regret that due to our failure, till date he is breathing.” Bose stated as a matter of fact.
The whole courtroom gushed at his unapologetic confession. And the judge perhaps sealed his judgement at that moment.

“You wanted to kill Mr Kingsford then why did you murder Miss and Mrs Kennedy?”
“It was our mistake. We misconstrued their carriage as that of Kingsford’s and the faux pass happened. I am really sorry about the death of the two ladies. But, they were never our target.”
And he kept on repeating this in his statements in the court in a dignified voice, how sorry he was for the loss of two innocent lives.
“Who else is with you two in this mission? Who is the mastermind?”

And this was where his silence followed. Like a devoted patriot, Bose took upon himself the entire responsibility for having thrown the bomb but refused to disclose the identity of his associates or any other secret. Even after much coaxing, cajoling and threatening, he never retracted his words for once. His determination and grit awed the audience packed courtroom.

The chief defence counsel still tried for a mitigation of the sentence based on the consideration of the young age of the accused and involvement of some higher authorities tampering with the immature minds. Bose has been just a tool in the hands of others committing the crime, they tried to emphasize.
I tried to look at the judge if the pleader’s word had any effect on him. But, found none.
Soon the court dispersed for a break. Everyone waited with bated breath for the final judgment.

When the lunch break was over, people started rushing back inside. The heat inside the room had increased manifold. Some, due to the scorching sun and mostly due to anxiety.

The Judge took his seat and in a solemn voice announced his judgement.

“The evidences, witnesses and the accused’s statement proves, the murder was deliberately planned and cruelly carried out under cover of darkness by the accused and his companion, both being armed with pistols, after long and careful preparation. His conduct, indicate great depravity and wickedness of mind, which can call for nothing but, the extreme sentence. This would send a strong message to these misguided youths to refrain from any such cruel acts in future. So referring to penal code section 302 and section 34, I hereby pronounce him to be hanged till death by August 11, 1908.”

As the sentence was read out, the defence counsel looked dejected and heartbroken. Some locals in the audience started crying and others were silent with grief. Except for one. The accused, who was now convicted.
His face showed no visible expression. That baffled even the Judge. Confused, he asked Bose,

“Have you understood the judgement?”
“Yes.” He replied with a smile.
“Are you sure? Appeal, if any, should be done in 7 days.”
“I understand, but I want to say something else.” The accused was still smiling.
“There is no time for it. I do not want it. Any last wish?” The judge dismissed him.
“My father, mother, brother, uncle, aunty all have passed away. No one is alive except my elder sister who’s son is about my age. Before dying I want to meet her once. But, that is not what I wanted to say.”
And he continued undeterred,
“The lawyer said, I do not know anything about bombs. If given the chance, I would have described how the bomb was made.”

The Judge was furious by that time and sternly commanded the police to take him away to jail. The courageous soul was still undisturbed. He seemed to be amused at the outburst and to fuel the anger, with all his might he shouted,

That was the last I saw of the selfless patriot, Khudiram Bose, who seemed to have just shown path to a new kind of freedom struggle, a bloody one. Posing as an inspiration to an entire generation of patriotic youth, he walked with his head held high, out of the court that day, immortalising my identity of that day. The youngest Indian revolutionary, Khudiram Bose, sentenced to death, who mounted the scaffold firmly, with a smile.
—–X——

Author’s Note:
This is a historical event that the author has tried to present in a story form. The author admits to having limited knowledge about legal sections and cases. The sections mentioned are mostly google searched.

1. Khudiram, along with Prafulla Chaki, attempted to assassinate a British judge, Magistrate Kingsford, by throwing bombs in the carriage they suspected the man was in. Magistrate Kingsford, however, was seated in a different carriage, resulting in the deaths of two British women. Prafulla committed suicide before arrest. Khudiram was arrested and trialled for the murder of the two women, ultimately being sentenced to death. At the time of his hanging, Khudiram was 18 years, 7 months, and 11 days old, making him one of the youngest revolutionaries in India.

2. Eminent lawyer Kalidas Basu was the Chief Defence Counsel. He was assisted by the Upendranath Sen and Kshetranath Bandopadhyay. Later joined by Kulkamal Sen, Nagendra Lal Lahiri and Satischandra Chakraborty — all of them fighting the case without any fees. The advocates looked upon it as an opportunity to serve the nation.

3. Kingsford also earned notoriety among nationalists when he ordered the whipping of a young Bengali boy, Sushil Sen, for participating in the protests that followed the Jugantar trial. As such, during his posting as the Chief Magistrate of the Presidency Court of Alipore, Kingsford became unpopular for passing harsh and cruel sentences on young political workers. He also inflicted corporal punishments on such workers.

4. The Vaini railway station has since been renamed ‘Khudiram Basu Pusa Station in honour of Shahid(Martyr) Khudiram.

Note: This post is a part of Blogchatter Half Marathon

Previous articleWhy should heroes have all the fun? My favourite side characters in fictional world
Next articleMy First Book Experience