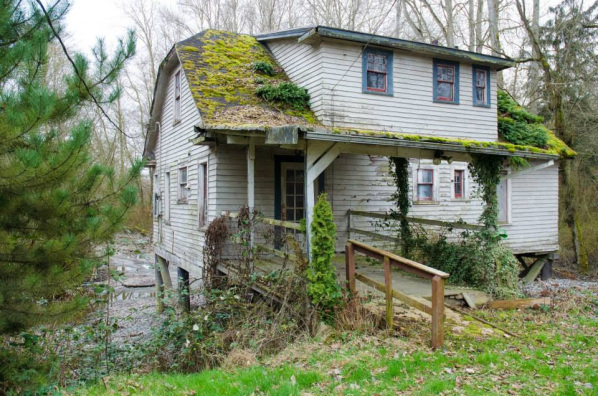 The old house, especially the north wing, seemed to have collapsed inwardly on itself, like something heavy had sat on the roof and sagged it. The slates on the roof were covered with patches of moss or lichen. Time had performed irreversible deeds upon the crumbled beauty of an era long past, stripped of her splendour, slumping under gravity, groaning in the gusting winds. On the southern part of this creaky building stayed my octogenarian grandfather.
All the coaxing of his sons to move to the city with them went in vain. He wouldn’t leave the house. The structure could crumble down anytime, we would argue. But, the old man countered saying that the house was grieving it’s inmates, who abandoned it. Its spirit was broken not the bricks. He was convinced, the house would not collapse, till it could hold onto at least one hope that stayed back with the memories of its birth, of the hugs and laughter that once were its colours and music. He was that last hope. Nothing in the world could deter him from his belief.
Today, I, his grandson, was visiting the wizened man, after getting an urgent call from his caretaker. His health was deteriorating and I was entrusted with the impossible job of shifting him to the city hospital.
“I know why you are here. But, I cannot go.” His hands were frailty, shaking gently as he reached out for mine.
“Dadu, please understand, you’re not well. We need expert advice,” I pleaded.
“Let me tell you a secret. I cannot see her if I go away.” He added in a croaky whisper, pointing at the window. The window looked over an unkempt garden, overgrown with grasses, pushing themselves high over the threshold of the door and almost reaching the window sills. Creepers, shrubs and wild grasses had overpowered the once ornate patio. But, I could see nobody outside.
Looking at my bewildered expression he smiled, “Not everyone is lucky to see her. She has been waiting for me patiently there for years. And I am afraid if I leave this place the bond would break forever.”
My medical skills were warning me this was nothing but, hallucinations, and I desperately wanted to check his sodium-potassium level. I decided to summon the ambulance and shift Dadu in his sleep.
*****
Dadu was shifted in the evening. All I needed was one sleeping injection. But, while leaving, for a fleeting second I felt I saw her. Blue, sad eyes, her brown hair, sparkling under the parting sun, standing amidst the creepers blooming with flowers. And then she vanished.
*****
The doctors couldn’t save him. After two days of battle he passed away. The next day, as we were preparing for the funeral, the caretaker called up to inform, there was a huge storm the previous night and the southern wing had caved in. With the spirit of the house gone forever, I just prayed she was still waiting for him.
—-X—-