Two days ago on 27th March, Kolkata celebrates the 120th anniversary of the introduction of its first electric tram. The Calcutta trams are however more than the heritage and nostalgia value it carries. In one of my earlier blogs, I talked about a sustainable urban mobility plan and how the epochal tramways can be a game-changer in the process for the city of Kolkata. You can read the blog here. However, to my dismay, the authority does not seem to be in line with that thinking. The hundred-year-old efficient transport network of tramways is on the brink of extinction with just three functional routes still surviving.

If the news is to be believed two of the busiest tram routes, Routes 5 (Shambazzar Esplanade)and 25 (Gariahat Esplanade) will soon be closed while a Metro tunnel is built near. This will leave only one functioning tram line left – route no 24/29  from Tollygunge to Ballygunge. A sad affair for a thriving system that once plied over 400 trams between 33 myriad routes. Besides, the repeated pleas of the public to start route 36 and 18 which were closed after the Amphan cyclone, is also being ignored. The reality is the existence of the trams is now in jeopardy.

Being an ardent tram supporter I was aware of these recent developments. However recently an article in the Quint drew my attention. The report claimed that while the government is slowly phasing out the tram routes for one reason or another, the same is in direct contravention to the Kolkata Action Plan for Clean Air drawn up by the Air Quality Monitoring Committee(AQMC) in response to the National Green Tribunal when the quality of Kolkata did not attain National Ambient Air Quality Standards (NAAQS). The plan included the electric tramways as a ready solution to the ever-increasing city pollution that’s already four times over the normal level.

To quote from the comprehensive plan –

The unique advantage of Kolkata is its inherent link between zero-emission electric mobility with public transport systems that include a network of metro rail and tramways. Both the systems have leveraged to move sizeable sections of daily trips to zero emissions modes. Tramways will need modernization, further strengthening, and network development to build on the unique advantage.

The complete action plan is available on Google.

The deadline to start the implementation was 2019 which is long overdue and the real scenario is far from the action plan given.

Who is the National Green Tribunal?

Established on 18.10.2010, under the National Green Tribunal Act 2010, National Green Tribunal works for effective and expeditious disposal of cases relating to environmental protection and conservation of forests and other natural resources including enforcement of any legal right relating to the environment and giving relief and compensation for damages to persons and property and matters connected therewith or incidental thereto. An important point to know about this body is that The Tribunal shall not be bound by the procedure laid down under the Code of Civil Procedure, 1908, but shall be guided by principles of natural justice.

As per their findings, the ambient air quality index of Kolkata remains in the “poor or very poor or severe” category for about 18-20 days in winter. The long-term annual average of the criteria air quality parameter also does not indicate any significant improvement.

The report also reveals the contribution to pollution from transport, industries and domestic sectors are 50%, 48% and 2% respectively.

Since transport is one of the major contributors, much emphasis was given to vehicles. Accordingly, certain measures were mandated and one of them was to optimise tramways and metros where emission is zero and the per-person energy consumption is minimal.

This Action Plan for Clean Air is understandably legally mandated, with clear deadlines. So with this deliberate non-compliance with the mandated action, we are violating the court order. 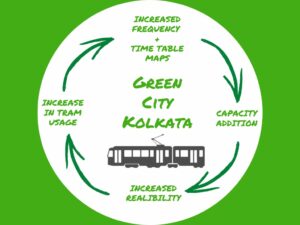 One of the prime reasons is political negligence. For ages, it has been neglected to die a natural death. The demerits were always highlighted more than the far greater merits.

It has been a common view that the trams are outdated and routes developed for autos have replaced trams, which serve people in a faster way. However the same is not entirely true. Where autos are a serious environmental hazard, not to forget a complete nuisance for the pedestrians, the fact remains that the tram would be a much cheaper, compact and environment-friendly mode of transport.

Another reason often cited for phasing out the city’s heritage is that trams occupy too much road space, carry few people and slow down traffic.

Truth be told, most of the congestion takes place due to other vehicles encroaching upon tram routes.

What is required is the modernisation of tramways by changing the old coaches, making them fast-moving and restoring the original network of tram lines. If congestion is a problem, we can operate single-carriage trams.

But such initiatives are kept at bay, as the ulterior motive behind the unjustified closing down might be a plan to sell off the large chunks of land owned by the Calcutta Tramways Company and used as tram depots to build high rise buildings.

Also, trams last for 50-80 years and spare tram parts have no value, so this leaves very little margin for corruption which might be discouraging for many.

Whatever may be the reason it is strange that even after concrete evidence of the increasing vulnerability of Kolkata to climate change, the abolishing of the environment-friendly transport systems is receiving little or no resistance from the public.

The government is giving such a big push for electric vehicles, but not utilising the ones that the city already has. Their focus is on battery-operated electric buses for public transportation. These, undoubtedly, are to be preferred over vehicles running on diesel/biofuel/CNG. But these buses come with their own set of problems –

• battery-operated electric vehicles cost significantly higher than the normal buses
• Battery life is limited.
• Modern batteries do not power a bus for the same number of trips as those that run on fossil fuels. So the no of buses per route is to be increased thus increasing the cost.
• the disposal of used batteries — a hazardous material can be another environmental deterrent.

Keeping these points in mind light railway system — the tram is making a comeback globally. Kolkata should adopt this model and depend more on trams to achieve the net-zero transition. With tramcar emissions zero and per-person energy consumption minimal it can rise to be a model transport system and the state can create an example for the entire country.

The silver lining to this black cloud

Not all is lost. With the increase in awareness of a clean city, more and more people are coming forward to save trams. Calcutta Tram Users Association(CTUA) is one such citizen’s forum, formed in December 2016 to create public awareness about the benefits of trams in general, garner public support for the ailing tram system of Kolkata and also find ways for the betterment of the city’s tramways. Members of varied age groups and from various backgrounds have joined the cause of saving this unique transport system.

The prime objective hereon should be to showcase the trams beyond their tag of the living heritage and uphold their value as a clean mode of transport. With India setting its net-zero emission target for 2070, Calcutta’s transportation needs to be geared towards that goal and the tramways network can be the perfect solution for the same.

You can also join the demand. Let us all come together and persuade the government to take necessary action for transforming Calcutta Tramways, for a sustainable and cleaner transport system.