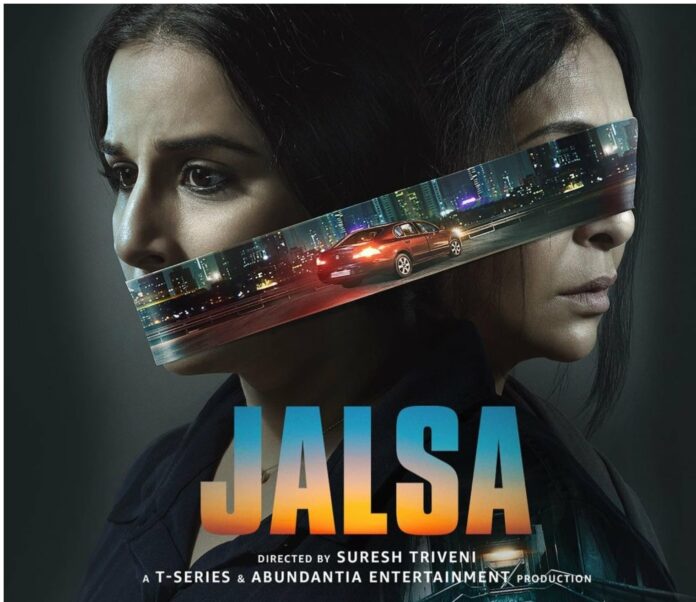 Just finished watching Jalsa on Amazon Prime. A powerful movie with riveting performances catches the attention of the audience from the first minute. The initial few minutes are fast, gripping and engage the audience well.

What follows from there on is a guilt-driven drama. The story is simple. The main protagonists are two Mumbai women – celebrity news anchor Maya Menon played by Vidya Balan and her house help, Ruksana played by Shefali Shah. Played by two powerful actresses who are at the top of the form (though I won’t call it their best), their already connected lives, gets intertwined by a hit and run case. A simple twist of fate combined with a momentary lapse of conscience leads to the chaos that runs the film. 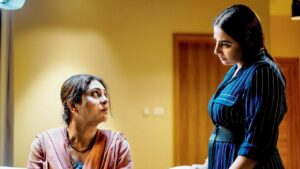 The sassy, boss lady Vidya Balan and complimenting her with a restrained, almost silent performance, Shefali Shah. The way Shefali’s eyes emote without speaking a word – her eyes should have a career of their own. One just can’t ignore the performance of the terrific duo. But the ones who steal the show for me are the kids. In my opinion, Maya’s specially-abled son Ayush, played by Surya Kasibhatla was absolutely brilliant in his role. By roping in an actor who is having the same condition in reality, Bollywood has opened the door to inclusively. His small but important part was so effective that immediately after watching I started googling about him. Even Ruksana’s kid son made his screen presence worthwhile.

And then comes the tricky part. The movie tries to touch a hell lot of topics – from social disparity to class difference, happenstance, relationship with our subordinates and call of human conscience. And all that in a subtle manner, not exactly speaking them out or being preachy.

The movie is devoid of theatrics, has stuck to realism with subtlety and shows more than what is shown.

Therein lies the strength and weakness of the movie. The subtle hints might not work for all. Also, the inability to sort the movie into a particular slot may disinterest the audience. Further, as the makers juggled too many issues in a short span most of the characters remained half baked. For example one would never know why Manav Kaul was roped in as Maya’s husband, why were they divorced or what was the relationship between Maya and her co-worker Amar. The character of the trainee journalist Rohini George suffered the most. The character could have a great arc but the makers decided to leave it carelessly.

Amidst all, it is the pace, or rather how things happen in the movie bothered me throughout. The mood in Jalsa is so sombre that it is brooding at times. And in such a case length plays a spoilsport. Also, the ending can be disappointing for some. The climax did leave me anxious though – more as a mother rather than a general audience. It was Ruksana’s silent demeanour that steals the show, but are we ready for such open-ended movies? In an attempt to be different Jalsa made things a little too complicated for the audience in my opinion. 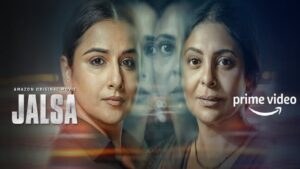 However, the most endearing part of the movie was the relationship between Ayush and Ruksana. We, the working mothers are so much dependent on these house helps. Through the small and warm gestures it was evident that for Ayush, his ‘Ruks’ was more than a house help. Maya’s family is shown as one of those progressive ones who seemingly doesn’t believe in the division of classes and any occasion would announce how they think of Ruksana as a part of their family. But, is that true? The hidden claws come out during testing times and the movie successfully unmasks many such hypocrisies.

It is this honest unmasking of the society, especially that of the privileged class which is the highlight of the story. “Jalsa” is not a film meant to shock the audience. It is a film designed to make the person think, what is the price of truth? Isn’t lie comforting enough when the benefits of lie outweigh the truth or are truth enough? Aren’t we all culprits of such dilemmas now and then? What should be the perfect choice when each path wrongs one or the other, including self? There were too many other thoughts to ponder some of which I am leaving here for healthy discussions.

1. What would have happened if Alia had died? It was only a matter of luck that she survived.

2. Would Maya have done the same if the victim was not Ruksana’s daughter?

3. Would Maya help Ruksana financially if she was not the culprit?

4. Finally why was the movie given such an unrelated name of Jalsa.

Will wait for interesting responses.