Body Shaming is Not a Joke 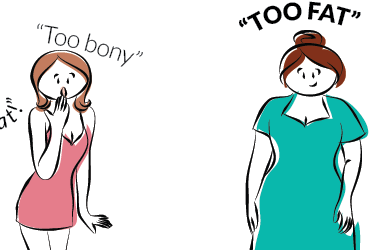 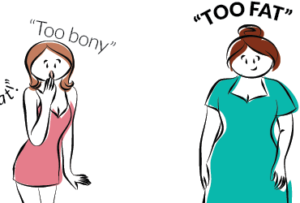 “Beauty begins, the moment you decide to be yourself.” –Coco Chanel

I decided to write this post after reading how a plus sized influencer was fat shamed when she went to a designer shop for her wedding dress. Yes, body shaming is a curse. But it is not limited to overweight figures only. Let me share my experiences.

Many years ago, we were boarding the bus to visit the Konarak Temple in Puri. I was all of 6 years old, visiting the sea for the first time. In the excitement of the first holiday I could not keep still. I was dancing, I was leaping, and was literally on cloud nine. Then a certain elderly couple decided to fetter my dancing steps. I had never met them before. A complete stranger, who decided that it was their moral duty to enlighten this little girl.

“Beware of the heavy wind. They can blow you away.”

And they laughed at their own joke.
Then they thought, it must not be clear enough for a child of my age, so they added.

“You parents look okay, your sister is also fine. Why do you look so thin?”

The words came down as a scourge on my naïve self. In my young mind, it meant only one thing. My parents and sister look pretty, and I don’t. Someone drowned my undefiled joy in a moment, without any reason.

This wasn’t a one off experience. Comments from the ‘well-wishers’ like this attacked at the most unsuspected places, during a celebration, a wedding I was attending, or just inside the home. These jokes usually come from the people who are very close and important parts of our life.

Apparently this was never meant to be ‘insulting’. The comments about ‘too-thin’ are not tagged under body shaming. So casually you can be called ‘a- shop-of-bones’ or warned about being ‘blown away’.

At first these comments hurt, then they seep into the subconscious and one starts believing in them. Insecurity creeps out of it and starts entangling the entire existence.

Body shaming is not limited to fat-shaming or dark complexions only. It comes in all shapes and sizes. But, they are there, lurking in the corner to grasp you without a warning, under the wrapper of a casual comment or just a ‘joke’.

When puberty arrived, it brought its friend, acne. And along came another set of gasps and words.

“What happened to your face?” As if they had never seen a pimple before!

“Your face looks dark for these scars. You should do something about it.”

These exclamations were accompanied by unsolicited advices. Creams, home remedies, medicines or chants.

And the best thing about this is that it never stops. Years later, by the law of nature, when I started gaining weight, these same ‘benefactors’ were over zealous to remind me the same and passing tips and tricks of getting slim. And being married added another flavour to the anticipation of these woke people.

I know I am not alone. A million of us are in the same boat. And the boat is sinking due to the burden of judgement, taunts and insecurities. But, is it worth the headache? In a clear term, No. As someone rightly said,

People discuss these things when they are not intelligent enough to discuss anything substantial. So I have adopted two ways to tackle these curious lot.

Eg. When people comment on the extra weight after delivering baby, it is usually, “Oh, have I grown fat? Never noticed. Thanks for letting me know.”

My motto, stop comparing yourself with others. Own your beauty, nurture it and let it glow.
Have you ever faced such body shaming? How did you cope up? What is your strategy? Do share with me.

Note: This post is a part of Blogchatter Half Marathon and CauseAchatter