India’s huge entrepreneurial potential is an indisputable fact. However in the second-largest populated country, the world’s seventh-largest economy, businesses are still a monopoly of men. The country is placed at a sorry rank of 108 in the gender gap, which aggregates a range of indicators from health and education to economic and political participation (out of 144 countries). The state is even worse when it comes to economic participation and opportunity indicators, where the country ranks 139 (out of 144 countries) (World Economic Forum, Report 2017). Women-led micro and SMEs play an important role in the growth and development of the country as well as global level, as they can produce both wealth and wellbeing for their families, communities and country. Unfortunately, women-owned businesses form only 13.8 per cent of enterprises in India. India’s economy would have much to advance if the economy would be inclusive of women. Among many other levellers, E-commerce has the potential to level the economic playing field for women in India.

Despite the joint efforts of the Government and NGOs in facilitating women entrepreneurship and flourishing their SMEs, there are numerous challenges and boundaries. The McKinsey Global Institute (MGI) suggests that Indian women contributed only 17 per cent of national GDP which is less than the global average of 37 per cent (Khetarpal, 2017). The challenges for the low share of women MSMEs arguably unconscious biases, challenges in accessing finance and building own network, lack of safety in public spaces, sometimes not getting enough support from family, lack of child-care options, often lack of confidence in their own skills in business, etc. To elaborate these are the top 5 reasons.

1. Limited finance – Women in India have legal rights to inheritance and property ownership. However, the socio-cultural norms and practices remain a barrier to accessing this right by women, due to which ownership of property by women is still at a minimum level. This hinders to use of them as collateral for obtaining funds from external sources. Thus, their access to external sources of funds is limited.

Secondly, banks and financial institutions do not readily provide credit to women entrepreneurs because they doubt the creditworthiness of women entrepreneurs and discourage women borrowers on the belief that they can at any time leave their business.

Thirdly, women entrepreneurs, particularly in rural and backward areas, have limited awareness about financial assistance in the form of loans and schemes.
Overall the women are deprived of the most important pillar of a business – finance

2. Limited Mobility – In India, unlike men, women face discrimination while looking for a place or starting a business. The men enjoy an unfair advantage to commute easily, without limitations. The travel of women are less safe compared to men and further, the socio-cultural practices aim to bind the women more to the household and restrict their movements.

3. Minimal support – Even in the 21st century, in India, women play the primary role in household chores and upbringing of children, while men play a secondary role in the same. The support of husband and other family members is often absent for these women which put enormous pressure on them to maintain the fine balance between family and business. The ultimate result – women leaving the work field.

4. Male-dominated market – Women are often under-represented in the business sector and even today this sector is male-dominated. Most of the organisations and associations in this sector are still headed and dominated by men with hardly any issues related to women being discussed. What seems to be the case is that women entrepreneurs’ concerns and issues remain within the women’s associations only.
in the male-dominated Indian society. Women are not treated equally to men. This, inequality of the patriarchal society, in turn, serves as a barrier to women entry into the business.

5. Lack of education – Women form 68% of the country’s illiterate population, says UNESCO’s education report. Lack of education or illiteracy is the root cause of all other challenges. With less education, the women face the hindrance of being less skilled to face the market. Numerous issues such as business development, maintaining accounts, understanding money matters or even day-to-day running of the company becomes a major hiccup when education fails. 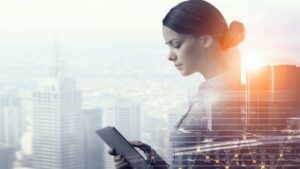 Women, who were held back by the shackles of traditional methods of business have found a new form of expression with E-commerce.  Women have now stepped out into the mainstream and trying to walk abreast of their male colleagues and are seizing new opportunities through technology. It has not only helped identify women entrepreneurs but also helped them taste success across businesses. Let us take a look at the various ways Ecommerce has tried to break the social barrier and enable more female entrepreneurs to take the bull by the horn.

It is the Digital India movement that started the change. The availability of cheaper phones, lower data tariffs and increased digital literacy, had enabled the advent of ecommerce in the country. India currently with 124 million women accessing the internet on their phone have brought a revolution in the consumer and the seller relationship. The e-commerce revolution has brought a great sense of financial independence and social empowerment for women. The major advantages that women entrepreneurs have gained from this digital revolution are far and many.

• Digital spaces have conceivably provided both men and women with equal opportunities. E-commerce has the potential to level the economic playing field for women.

• Minimum investments, the comfort of working from home, and larger audience outreach are the primary reasons for the emergence of online business as the favourable platform for women entrepreneurs.

• Many practices synonymous with traditional ways of doing business like acquiring a physical setup can be bypassed now. This helps to reduce a major component of investment, thus lowering the operating cost and improving the quality of service.

• With a product listing on an e-commerce platform, the world is for the sellers to conquer. The limitation of the geographical area has been overcome, business scaled up and ultimately they can reach a larger market for more outreach. This provides a greater reach for the women entrepreneurs however working within the four walls of the house

• With the e-commerce platform in hand, the marketing and distribution cost is reduced substantially. Also, the middleman exploitation is removed thus giving the women a fair playground.

• With the removal of middlemen and brokers, E-commerce enables SMEs to directly deal with manufacturers and suppliers and thereby, ensuring competitive pricing.

• One of the biggest deterrents for businesswomen are family responsibilities. It so happens, often spoilt for choices between family responsibility and business responsibility, women have to leave their jobs or work. Also, cultural barriers in some societies require women to stay in the house. With e-retail bound work, women can work from the comfort of their household and at their convenience. They can now organize their work around their day-to-day chores and delegate aspects of their business such as logistics to third parties. A pickup agent will then collect the product at their doorstep at a pre-decided time thereby reducing the demands for the entrepreneur. This is only possible because of the advancement in the field of E-commerce.

• The introduction of Indian digital payment platforms has revolutionized financial transfers through low-cost technology that enables mobile-to-mobile transactions. For a budding entrepreneur, particularly a woman, the ability to receive online and mobile wallet payments are life-changing. Very quickly a business can transform from being local only, into a successful national or even international enterprise.

Given proper opportunity, women can emerge as business leaders with their skill, adaptability and understanding.

The e-commerce industry can serve as the catalyst and more heights can be attainable with women entrepreneurs handling the business either from home or on the go. The barrier to becoming an entrepreneur has definitely been reduced with the growth of e-commerce.

The skill to trade online has aided various small businesses run by females to receive access to a brand-new set of consumers with nominal investment and achieve maximum profit with minimum investment. This remarkable achievement empowers women from every nook and corner of the country. With a little more business literacy, government schemes’ related literacy, financial literacy, women can touch the zenith in the MSME sector with the help of Ecommerce.